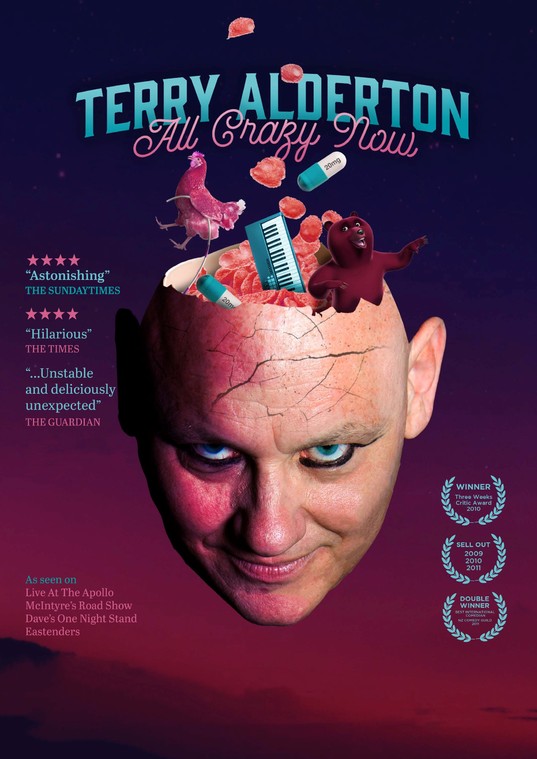 Superstar Terry Alderton comes to Brussels before embarking for his UK tour.  This is our first show at Espace Senghor, just next to Place Jourdan, right in the EU district.

The prolific, uncensored and self-assured Terry Alderton embarks on a four part series where he plays every character and sings every crazy song.

‘Terry Alderton’s All Crazy Now’ is not so much a radio show, but a piece of evidence against him, or possibly cathartic expungence from years of frustration and self censorship. This is a wild ride that Dabster is proud to bring to BBC Radio 4. ‘All Crazy Now’ is unique – if Kenny Everett and Spike Milligan got together they would be making a show like this. It’s a one man Goon Show not to be missed.

Terry plays all the characters himself – every single voice you hear is him – from dancing bears, Akil Chowdry, Morgan the Freeman, his inner voices, Victor, a sketch which is about a mother and something to do with Monkey Fights. Oh, and there’s songs – songs about pole vaulting chickens, sausages, cornflakes and keeping your dreams alive….

Film credits include ‘The Flirting Club’, ‘Keeping Mum’, ‘Black Ball’ and ‘The Jam’. Terry is the man behind online sensations ‘Danny Dire’ and ‘Bloke Cast’ and short film ‘Brahms and Liszt’. Terry has also had many critically acclaimed smash hit Edinburgh shows and national tours in 2010, 2011 and 2012.