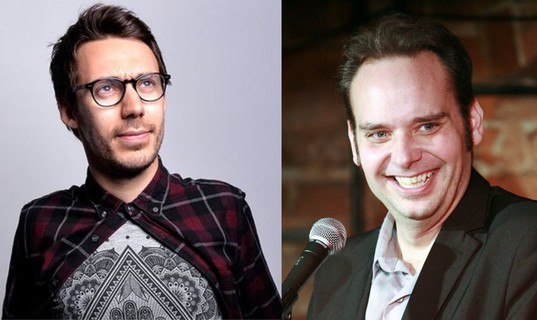 Here's another very special show with two returning comedians who did fantastic last time they performed in Brussels.

Tom is one of the hottest young comedians and presenters on the circuit.

He has been performing live stand-up for the last eight years – with three Edinburgh solo shows under his belt – and has been the host of his own TV, radio and online shows on BBC2, BBC Radio1 and YouTube football channel Copa90 – where his Eurofan escapades have notched up over 1 million views.

Tom has made guest appearances on BBC2’s The Rob Brydon Show, Dave’s One Night Stand and ITV2’s Fake Reaction and this year he performed at The Melbourne Comedy Festival Roadshow in sold-out, 1000-seater theatres.

A mighty fine comic
The Guardian

With looks, confidence, charm and great material; expect other comics to lynch him
The Sunday Times

If you want serious comedy David Tsonos is not your man. His comedy stems from being the youngest of five boys, babysitting his nephews and his cat. He has appeared at the Vancouver Comedy Festival and can be heard on Satellite radio. Whether it’s a Bar gig, a Comedy Club or a Corporate function David makes them laugh until they can laugh no more. (Well maybe a little more.)

David has been touring Canada since 1999, from one end to the other several times, and now doing shows in the USA and the U.K. When not touring David has acted in commercials and TV shows. He also has found time to Write and Direct his own independent films.

Contrary to popular belief, he is neither Greek nor Jon Lovitz, but will gladly act like either if the price is right.