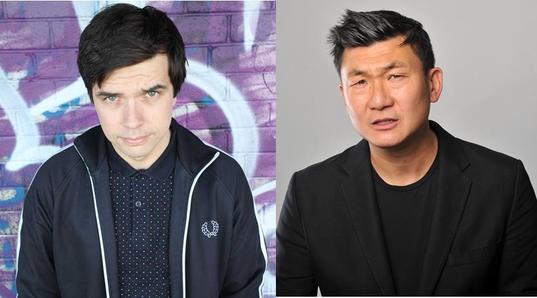 Chris Kent is back in Brussels, and with him a newcomer to our comedy nights, Rick Kiesewetter, check them out!

In 2013 Chris Kent was voted as one of the Top Five Irish Comedians by Hot Press Magazine, following on from being listed as “One to watch” in The Dubliner magazine’s ‘Red Hot and Rising’ for 2012.

Having shared the stage with the likes of Bill Burr, Dylan Moran, David O’ Doherty, PJ Gallagher and Neil Delamare, Chris himself is en route to becoming a household name.

‘The young Cork man is a gifted storyteller of yarns, centered on misunderstandings, frequently with himself as the butt of the joke. His seemingly nondescript tales are garnished with rich, surprising details, delivered with an endearingly straight face. The raw, rough edges of his slow, deliberate delivery make it feel like you’re listening to the hapless, slightly touched one in your group of mates.’ Jay Richardson

His festival appearances include The Kilkenny cat laughs, The Vodafone Comedy festival, The Galway Comedy festival, Electric Picnic, and many more on the Irish scene. He has had two successful runs at the Edinburg Fringe Festival in 2012 and 2013, performed at the Irish comedy Festival Dubai 2014, and is set to do a string of worldwide gigs this year.

In 2010 he was the recipient of the Comedy Smack Down Award at the Galway Comedy festival, and Winner of the Bulmer’s Nuttin’ But Funny Comedy Award 2009.

‘A comedy natural’ Beyond The Joke

Rick was adopted in Japan and raised in New Jersey and is now a British citizen, this gives him a unique view of the world. His comedy is based on his life experience, everything from his time in US Military Intelligence to being the first Asian contender in the cult UK TV show, Gladiators.

He regularly performs at top comedy clubs across the UK both as a compere and act and loves to interact with the audience. He’s taken 2, hour long shows to the Edinburgh Festival: Chink and No More Mr Rice Guy. TV appearances include the BBC Comedy Awards and NBC’s Last Comic Standing. Rick is just a New Jersey guy, living in London and ready to make you laugh.

‘observational gags about the little things that annoy everyone.” Bruce Dessau