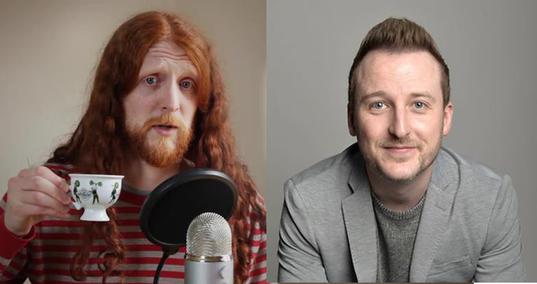 For this show we have two comedians that will perform in Brussels for the first time, but check their already incredible pedigree:

Alasdair is a legendary comedian, in that there is little historical evidence that he exists. But he does exist. Leicester Mercury Comedian of the Year 2017, Alasdair has featured on BBC radio as a comedian and sketch writer, and performed stand-up across the UK, at Glastonbury, Citadel Fest, the Udderbelly Southbank and at the Edinburgh Fringe. He knows quite a lot about 19th century magicians. Tourists often ask to have their photo taken with him, presumably impressed by this.

Described by The Sun this year as ‘Scotland’s brightest comedy talent’, the Glaswegian comic’s sharp one-liners, brilliant turn of phrase and clever wordplay has made him a perfect choice for regular appearances on BBC Radio Scotland’s new comedy panel show ‘Breaking the News’ as well as support for Stewart Francis and Hal Cruttenden on their national tours.

Since making his comedy circuit debut in 2009, Stuart has very quickly become one of the most exciting talents in recent years, performing across the biggest comedy clubs in the UK as well as the 101 World Comedy Series competition in Las Vegas 2015. He was shortlisted in 2013 for the prestigious BBC New Comedy Award and was a Finalist in the NATYS competition in 2012.

Stuart was part of the Stand-up For Scotland show at the Adelaide Comedy Festival in 2013 and appeared in the AAA Stand-up Late show and CKP Lunchtime Special at the Edinburgh Fringe 2014. He has written for ‘Mock the Week’ (BBC1), appeared on ‘The Loser World Cup’ for BBC Radio Wales and ‘On the Road’ with BBC Scotland. He is now working with BBC Comedy, on a scripted development project.

“Scotland’s brightest comedy talent.” – THE SUN
“Amazing performance…it’s a pleasure to catch him before he makes it big.” – THE SKINNY
“Rising star of the comedy circuit.” – THE SCOTSMAN
“Straight out of the school of self-deprecating Glaswegian comedians, comparisons will inevitably be drawn between Mitchell and Kevin Bridges” – Three Weeks
“Huge talent” – Broadway Baby
“Strong, with wry references” – Chortle