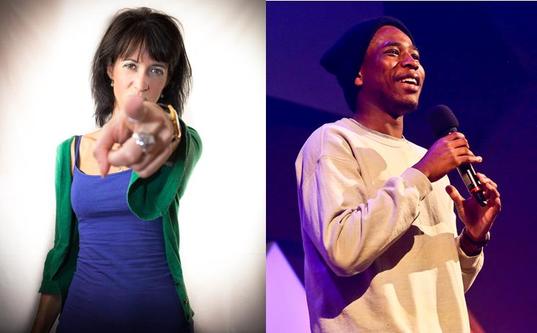 Our second show of the season will feature Sally-Anne Hayward, whose performance last year was awesome, and another award winning comedian Michael Odewale, performing in Brussels for the first time. Here’s another comedy night not to be missed!

##Sally-Anne Hayward Sally-Anne Hayward combines the things you shouldn’t like about your best friend’s mum with the sensibilities of Jack the Ripper.An accomplished radio presenter with stage and TV acting credentials (‘Absolutely Fabulous’ BBC, ‘Why the Long Faces’ Square Donkey Productions, and TV warm-up for ‘Deal or No Deal’ Channel 4), Sally-Anne’s confident persona and quick wit have rapidly made her a much sought-after comedian. She’s a regular compere at Glastonbury Festival, and a keenly anticipated turn on the UK comedy circuit.Sally-Anne is an award-winning comedian (Holsten Pils ‘Fans of Comedy’ award) and a sought-after corporate performer (with clients including Orange and Alcatel).

She has performed all over the world and has provided tour support for Sarah Millican, Russell Howard and Russell Kane.

##Michael Odewale An exceptionally smart young man with something to say, Michael Odewale’s stand up covers everything from politics to pigeons. He began performing in 2014 while at university and was a finalist in both the Chortle Student Comedy Award and the BBC New Comedy Award.

A fresh new voice known for delivering sharp, slick and beautifully executed content, Odewale is set to take the comedy world by storm and has already performed at UK’s most famous venues, written for BBC Radio 4 and performed on Chris Ramsay’s Stand Up Central for Comedy Central.