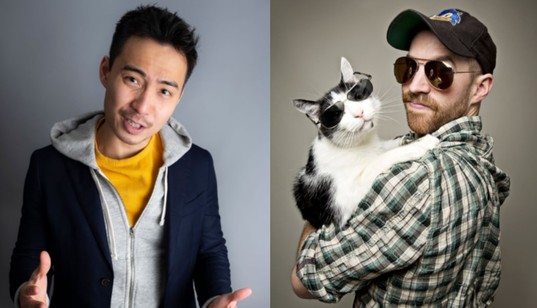 Aussie boy Damian Clark is finally back!  He's been one of our favorite acts since the very begining of our Comedy Nights.  Together with him, Malaysian comedy sensation Nigel NG is also paying us another visit.

Damian Clark burst onto the UK comedy circuit in 2012 where his high-octane observational stand up has certainly caused some waves. Clark’s infectious energy and childlike outlook has had audiences in hysterics from the get-go and was snapped up immediately to appear on BBC3 & Comedy Central.

Clark had the audience reeling with laughter…he is scorchingly funny and charmingly engaging. Three Weeks

There is barely a bad word to say about Clark: distinctive and possessing a comic talent beyond his years, both biological and mental. Chortle

Nigel Ng grew up in Malaysia, lived in America for five years and moved to the UK in 2015. Having started his comedy career in Chicago, he’s relieved that (most) people in the UK get his jokes too, as evidenced by him winning the prestigious Amused Moose Laugh Off 2016 and being runner up in the Laughing Horse New Act of the Year 2015.

His combination of laid back likability and sharp observations are sure to get him far.