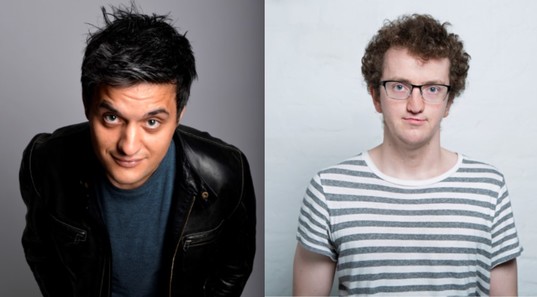 Two newcomers to Brussels for this show, but just check out their credentials, wow!!

Jonny Pelham began at University and while he was there he achieved runner-up in both the coveted So You Think You're Funny competition and The Chortle Student Comedy Awards.

Since graduating university Jonny has continued to impress and was a finalist and judges choice in the BBC Radio New Comedy Awards, as well as being nominated for Chortle Best Newcomer in 2014.

With four critically acclaimed solo shows under his belt, Before and After (2015), Fool’s Paradise (2016) Just Shout Louder (2017) and Off Limits  Jonny has also made the exciting step over to the small screen on

- Live From The BBC

-Live at The Apollo.

Jonny has also appeared in the Viceland series, Bobby & Harriet Getting Married and Plane Spotting for Turtle Canyon.

Most recently, Jonny had his own short film released as part the Sky Comedy Shorts season, Late Bloomer. Currently, Jonny is working on his first sitcom script commission for Channel 4.

George was born and raised in Kalamata, Greece, under an olive tree. He moved to Newcastle to study Biochemistry and then, after a sting of playing poker for a living, he did his first stand up comedy gig. Nearly a decade has passed and he is now a full time comedian, featuring in most UK comedy clubs and performing in festivals across the world, such as Melbourne, Perth, Adelaide and of course Edinburgh where he has been turning people away for the last 2 years.