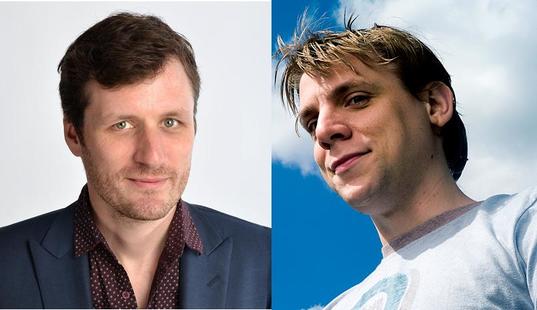 For our July show we are delighted to welcom back Michael Fabbri at The Black Sheep.  Together with him, first timer Danny Ward, check them out, they are outstanding!

Danny Ward has been a circuit favourite in the UK since 2009 and now regularly brings his unique style of comedy to the Continent.

In 2013 he won the prestigious Amused Moose People’s Award at the Edimburgh Festival for his debut show Pressure Point.  He will return this August with his 4th one hour solo show.  Danny has spent the last year writing, producing and starring in webseries wheelbarrow Town, available now on Youtube.  Besides the comedy clubs of the U.K. Danny is a favourite at the Summer festivals such as Glastonbury, Larmer Tree and Beautiful Days.  His comedy is ‘slick, quick and packed with funny material’ (3 Weeks, 2015) and is always certain to provide a show stopping performance wherever he goes.

With a dark and honest approach to some of life’s more touchy subjects, Michael Fabbri manages to effortlessly slip between some harsh, controversial topics to light-hearted silliness to make for a refreshingly eclectic and brilliantly funny act.

Michael Fabbri quickly stamped his mark on the UK circuit appearing in the 2003 final of Channel 4’s So You Think You’re Funny? competition and rapidly earned a reputation as one of the most promising up and coming comedians on the circuit; A reputation that he is living up to, regularly performing for the best clubs in the country.