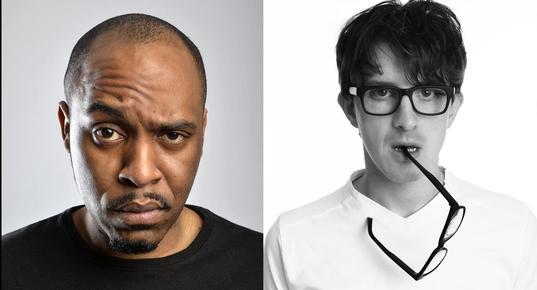 After the incredible success of his debut show Citizen Dane (which saw him nominated for Best Newcomer at both the Foster’s Comedy Awards at 2014’s Edinburgh Fringe Festival and again in 2015’s Chortle Awards), Dane has completed two sold out runs at The Soho Theatre (with additional dates added due to phenomenal demand), written and starred in his own sitcom for the BBC and performed at the Melbourne Comedy Festival.

James Veitch is a musician, comedian, director, writer and performer. In 2014, his first solo comedy show The Fundamental Interconnectedness of Everyone with an Internet Connection premiered at The Edinburgh Fringe to wide acclaim and was a sell out show for the festival. As a writer his work has been published by The New York Times and in various short-fiction journals. He curates the website www.bluffable.com where he publishes comic transcripts of conversations he orchestrates with online email scammers, (“I laughed my ass off,” The New York Times.”)

“Veitch is ahead of the curve” – Guardian
“A wicked sense of humor. I laughed my ass off” – New York Times
“Ingenious .. one to watch” – Independent