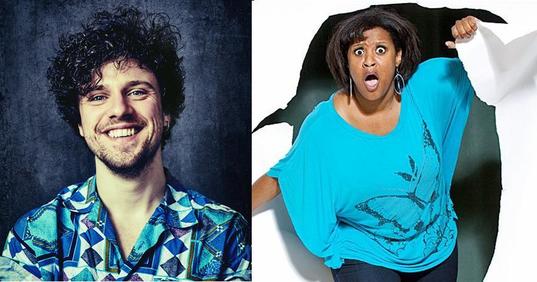 2018 begins with another incredible comedy line-up, check this out!

“Quite simply the future of British stand-up”

Alfie’s firebrand style of comedy has been forged from years of pushing boundaries and experimentation.

Natural stage presence combined with explosive material makes for a thrilling performance every time he hits the stage.

Constantly evolving and striving for ways to innovate, Alfie can move from hour-long idea driven shows to tight sets in various clubs effortlessly.

His material touches on introspective thoughts and considerations of the human condition as well as broader observations on social-political issues. All done in an accessible and hilarious way.

An assertive, acerbic and compelling voice, Alfie has garnered critical acclaim throughout his career and continues to grow a fan base here and throughout Europe. With the benefit of being a young act with years of experience the future is bright for this phenomenal talent.

Dana Alexander is currently one of Britain and Canada’s hottest comedians – her style has been described as smart, irreverent and revolutionary

Dana Alexander began her career at the age of 18 years old in Canada, before long she began touring nationally with Yuk Yuk’s Comedy Clubs and completed 5 television galas and a handful of radio spots for CBC and Sirius XM. In 2011 Dana made a move to the UK where she premiered her one woman show at The Edinburgh Fringe Fest. After rave reviews and several nominations including “Best Comic” and “Best International Act” from Chortle and Black Comedy Awards.

It was not long before she began working in television on BBC programs like Russell Howard’s Good News and Edinburgh Comedy Fest in 2012 and featured on The Culture Show in 2013 for BBC 2.

Refreshing and Fearless, Dana quickly became a regular fixture on the Canadian Comedy circuit, resulting recently in her own half hour comedy special on the country’s number one Stand-up show Comedy Now and Top 10 Comedians 3 years running by NOW MAGAZINE. Dana draws her material from raw life experience with an original and hilarious outlook.