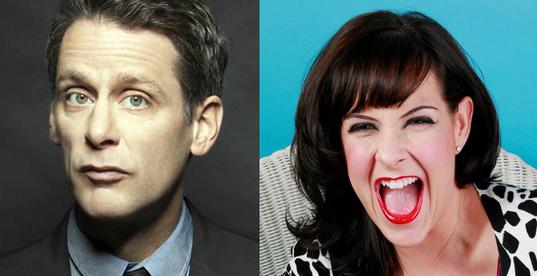 For this event we have two returning favorites of our crowd, so get ready for the ‘crème de la crème’ in comedy!

Scott is a veteran of our TV screens. A diverse performer (read: difficult), Scott’s talents were also incorporated into various films, when he was young and film worthy.

Scott regularly plays almost every comedy club in the English speaking world, including the Punchline in San Francisco, the Comedy Store in London, the Comic Strip in New York City, and Yuk Yuks in Toronto, Canada.

Also an experienced actor/director, Scott trained at UC Irvine, California, where he received a bachelors degree; and in the UK at Birmingham University. Credits include performances with the following companies/theatres – A.C.T., The Eureka Theatre, The Magic Theatre in San Francisco, the New Playwright’s Theatre in Washington, the Beverly Hills Playhouse and both the Finborough Theatre and the New Arts Theatre in London, UK.

Since 2000, Allyson June Smith has been tickling Canada’s comedy scene from the moment she put down the chalk brush and picked up a mic.
Playing to packed rooms has become like another day in the classroom for this former school teacher.

Her credits include her own hour long Comedy Now special, appearances on CBC Radio’s hit show The Debaters, and the Winnipeg, Halifax and Just For Laughs Festivals, to name just a few. A multiple Canadian Comedy Award nominee for Best Female Stand-Up, she performs for audiences ranging from corporations to the most rural of gatherings. Whether she was the emcee, support, or headliner, she’s delighted them all.

After working her way across Canada, Allyson now has taken her craft to the UK. Using her sassy blend of in-your-face stand-up and hilariously insightful commentary, she now works for major UK promoters and comedy clubs.

It is her genuine and unique sense of humor, combined with excellent performance timing, that has made audiences augh. This teacher-come-comic is ready to show international audiences why she is a sought-after fan favourite.