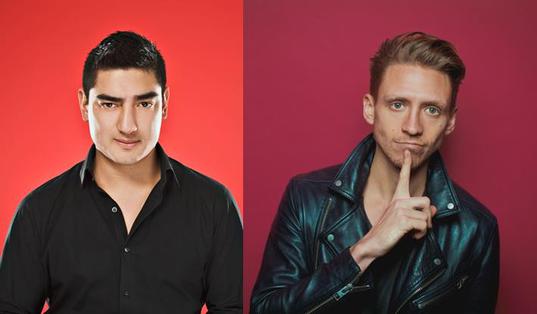 For this show, two great young comedians who have created quite a buzz on the UK circuit lately. Not to miss!

Alistair Williams describes his comedy style as the ramblings of a moron. He must be doing something right though as he is highly regarded as one of the most exciting newer acts on the UK comedy circuit. Other people have described him as a ‘must see comedian for those looking for straight out laughs’.

An observational storyteller, Alistair has been performing stand-up for just under three years; rising through the ranks at a rate of knots excelling in any situation he is put in. After winning the Piccadilly Comedy Club’s New Comedian of the Year 2014 award and reaching the finals of prestigious competitions (Amused Moose Laugh Off, Leicester Square New Act and Laughing Horse New Act) Alistair is already on his way to the top.

Combining high energy with a super charismatic stage presence, Alistair is one of those rare commodities in the comedy world with his consistent ability to produce new material of the highest standard. However long his set, it is sure to be packed with gags from start to finish; he is a genuine joke machine.

“He has a charming and confident stage manner and his material is fresh and very funny. He endeared himself to the audience and left the stage to a loud round of applause.” — Bearcat Comedy

Javier Jarquin is a regular at the biggest clubs in the UK– delighting audiences with well crafted jokes and a very likeable stage persona. He is also a well known act in his native New Zealand and headlines gigs across Europe.

Before coming to the UK in 2010 Javier spent 4 years working as a professional comedian in New Zealand. After winning the ‘So You Think You’re Funny’ competition in Christchurch, he played and headlined gigs on the circuit in NZ and Melbourne, appeared on a host of television shows, and was a core member of New Zealand’s longest running comedy show: Scared Scriptless. He also took his debut solo stand up show ‘Joke Ninja’ to the Edinburgh Fringe in 2014.

2015 off kicked off with a bang for Javier after featuring at the TouMazing Festival in Norway and in August, Javier performed his hugely popular ‘Card Ninja’ show to sell out audiences at the Edinburgh Fringe Festival. Over 3,000 people came to see the show and it let to Javier doing a full UK tour earlier this year. He sold out the Udderbelly venue on London’s Southbank, playing to over 400 people and was invited to play ‘Card Ninja’ again at the same venue for a limited run at the EdFringe this year.

Alongside this, he will be performing a stand up show ‘Hombre al Dente’ every day at Just the Tonic’s Caves. Here, Javier explores what it means to be a man in the modern day.

“An entertaining comedy show with plenty of laughs” — Edinburgh Spotlight

“Would never have a doubt about booking him here in the Cafe or anywhere else.” — Neale Welch, The Comedy Cafe

“They loved him, he was chilled and non aggressive which worked well with the really relaxed atmosphere of the gig.” — Bryan Malcolm, Ha Ha Comedy

“He can read an audience, pitch his level and deliver a brilliant set every time. Consistent, great results. Aside from his comedy we’ve found Javier to be very professional. He is punctual, sticks to his time and is very easy to work with.” — Mark Rothman – Top Secret Comedy Club