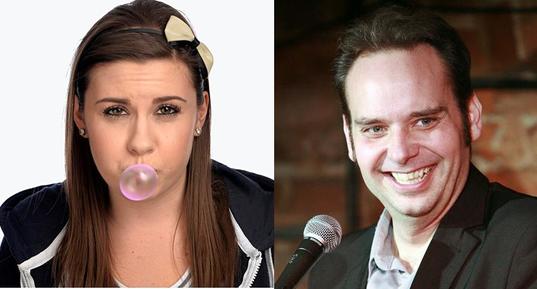 Sarah Callaghan is headlining this show. Check out her impressive Bio!
Canadian David Tsonos will be on board as well, for another great evening of comedy!

Sarah Callaghan is an award-winning comedian and writer who has taken the comedy scene by storm with her frank and fearless style.

“The instant she steps on stage you know you’re in the presence of someone new and special” ★★★★★ The Mirror
“Armed with bags of attitude, she’s a refreshing working-class comedy voice…reminiscent of a young Kathy Burke” ★★★★ The Herald

In 2014 she was named as ‘One to Watch’ by Time Out and in 2015 she took her critically-acclaimed debut hour show Elephant to the Edinburgh Fringe. A confessional exploration of escape and ambition, Elephant played to packed houses and received great reviews across the board. She also appeared on E4’s Virtually Famous as a guest on Seann Walsh’s team.

In 2016 Sarah was a guest on @elevenish (ITV2) and she returned to the Fringe with her eagerly-awaited follow-up, 24, which she once again took on to Australia for a second run of shows in the Sydney and Perth comedy festivals in 2017. Sarah returned to Edinburgh this year with her new show, The Pigeon Dying Under the Bush, and continues to take the live circuit by storm.

“Fiercely impressive and quite stunning” ★★★★ Scotsman

“Magnificent performance. An absolute natural, Callaghan is definitely one to catch” - Fest

“Callaghan oozes confidence. This supremely talented comic is ready for the next step.” ★★★★ Broadway Baby

If you want serious comedy David Tsonos is not your man. His comedy stems from being the youngest of five boys, babysitting his nephews and his cat. He has appeared at the Vancouver Comedy Festival and can be heard on Satellite radio. Whether it’s a Bar gig, a Comedy Club or a Corporate function David makes them laugh until they can laugh no more. (Well maybe a little more.)

David has been touring Canada since 1999, from one end to the other several times, and now doing shows in the USA and the U.K. When not touring David has acted in commercials and TV shows. He also has found time to Write and Direct his own independent films.

Contrary to popular belief, he is neither Greek nor Jon Lovitz, but will gladly act like either if the price is right.