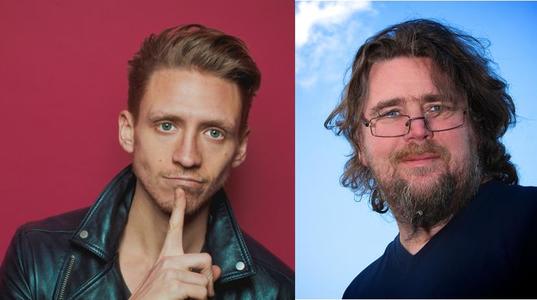 For this show we are very happy to have Alistair Williams back, after raising the roof of The Black Sheep in November 2016.  With him we have a newcomer to our comedy nights in Brussels, Michael Downey!

Alistair Williams describes his comedy style as the ramblings of a moron. He must be doing something right though as he is highly regarded as one of the most exciting newer acts on the UK comedy circuit. Other people have described him as a ‘must see comedian for those looking for straight out laughs’.

An observational storyteller, Alistair has been performing stand-up for just under three years; rising through the ranks at a rate of knots excelling in any situation he is put in. After winning the Piccadilly Comedy Club’s New Comedian of the Year 2014 award and reaching the finals of prestigious competitions (Amused Moose Laugh Off, Leicester Square New Act and Laughing Horse New Act) Alistair is already on his way to the top.

Combining high energy with a super charismatic stage presence, Alistair is one of those rare commodities in the comedy world with his consistent ability to produce new material of the highest standard. However long his set, it is sure to be packed with gags from start to finish; he is a genuine joke machine.   “He has a charming and confident stage manner and his material is fresh and very funny. He endeared himself to the audience and left the stage to a loud round of applause.” — Bearcat Comedy “Rough diamond charm” — Chortle

Shortly after he’d left college Michael Downey and Alan Donnelly were approached by Ardal O’Hanlon to write some stand up material for him for BBC’s Stand Up Show.

Finalist in the BBC & Channel 4 New Comedy finals in Edinburgh alongside Alan Carr, Russell Howard & John Bishop, Michael was getting all the right plaudits in the early noughties, so well was it going he jacked in the day job and was going full tilt at the stand-up, regularly playing venues in Dublin, Galway, Cork, Belfast, London, Manchester, Glasgow and Edinburgh.
Unfortunately, he was involved in a near fatal road traffic accident that kept him away from the comedy scene for a very long time. He’s now back in business and will perform in Brussels for the very first time.