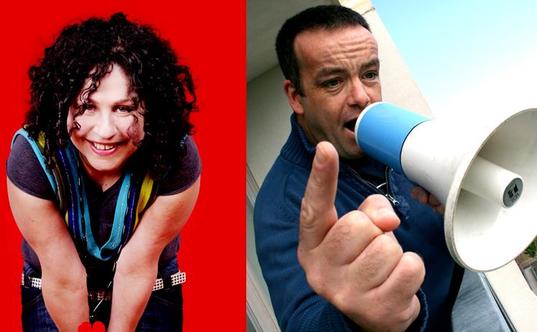 Managing to mix silliness with edginess, Juliet has a chatty gag-driven style that allows her to interact with the crowd; this makes her much in demand both as a comedian and an MC across the UK comedy circuit. She has also performed sell-out shows at Edinburgh Fringe 2016, 2017 & 2018 and Melbourne Comedy Festival  2015.

She has also gained a reputation for topic comedy and has been a panellist on various comedy shows discussing current affairs.

“Devilish coy look, excellent material with some on the edge gags.” The Scotsman

“Had me in stitches with her witty observations and social judgements.” bbc.co.uk

John Colleary is star and co-writer of the 3-time IFTA nominated THE SAVAGE EYE. His credits include appearances on STAND AND DELIVER & THE PANEL (RTE2), as well as being the writer/performer of popular slot LAST ORDERS on TODAY FMs LAST WORD.  He is one of Dublin’s most sought after MC’s and comedians and also one of our crowd’s favorite acts.