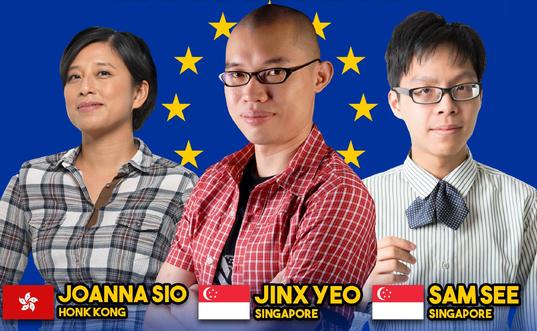 Attention, this show takes place on a Monday
Some top Asian comedians are arround after their run at the Edimburgh Fringe. Don't miss their first ever show in Brussels!
Jinx Yeo
Jinx Yeo is an award-winning Singaporean comedian. His hard-hitting punchlines, effortless delivery, and clever material won him 1st Runner-Up at the Hong Kong International Comedy Festival (2011). Jinx's comedy has been featured on TV in programs such as Comedy Central Asia (where he was “Comedian of the Month” for June 2015), Singapore Channel 5’s “Ok Chope" as well as ABCTV’s “Comedy Up Late” (recorded at the Melbourne International Comedy Festival 2017).
Birthed from intercourse between his strict conservative Asian upbringing, and anti-authoritarian Hippie influences from studying in America, Jinx's comedy offers a fresh perspective that hasn't been covered by many comedians, partly because Singaporeans have often been stereotyped as humourless and regimented people. Jinx has a diverse arsenal of hilarious and original material, that enables him to adapt his performances to a wide range of audiences – young or old, foreigners or locals, club gigs or corporate shows. His side-splitting stories, sharp observations, and bewildering imagination leaves audiences in stitches.
Sam See
Sam See is part of Asia's new wave of stand-up comedians, entertaining audiences from around the globe for over half a decade with his unique blend of jokes, stories and improvised humour. Sam has appeared on MTV, iFlix,Channel 5 (Singapore’s nation-wide English broadcaster), and Comedy Central Asia, where he is one of their featured comedians. He has also been selected for numerous comedy festivals, including the Singapore Comedy Fringe Festival, the Crackhouse Comedy Carnival and the Magner's International Comedy Festival.
Joanna Sio
Joanna Sio is an improviser and a stand-up comedian from Hong Kong. She won second place at the 2012 HK International Comedy Competition while she was 9 months' pregnant. She was part of Singapore's very first all-female touring comedy troupe, 'Comedy on Heels'. She has performed in numerous comedy festivals, including the Singapore Comedy Fringe Festival, Manila Improv Festival, the Magner’s International Comedy Festival, Kuala Lumpur International Comedy Festival and Fringe World. She was invited to perform in the Melbourne International Comedy Festival 2015, the first troupe of 'Comedy Zone Asia' and represented Hong Kong to compete in Laugh Factory's Funniest Person in the World Competition in 2016. She is a feature comedian in Comedy Central Asia.
Doors open at 7 pm
Online tickets : 20€
On the door : 25€
Order tickets here!
Share this on → Twitter Facebook Google+