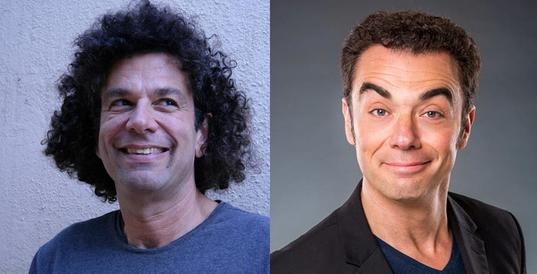 AL Lubel is finally back in Brussels!

Al Lubel became a lawyer to satisfy his mother and quit to become a comedian to satisfy his sadistic need to torture her. After graduating law school in Florida, Al moved to California, passed the bar exam on his first try and immediately began the practice of standup comedy.

Al practiced law during the day and comedy at night. Getting stage time is hard for a beginning comic, so Al would sometimes suddenly stand up in the middle of Denny’s, and unannounced, do five minutes. And Al always did well because he had everyone’s rapt attention because people were scared he might hurt them!

Al gradually improved at comedy, getting work on the road and leaving the law behind. Within a year he won the $100,000 Comedy Grand Prize on Star Search. Doing the Tonight Show was a big childhood fantasy, so Al auditioned and became one of the last comics to appear with Johnny Carson. Al went on to do six more Tonight Show appearances with Jay Leno and made five appearances on the Late Show with David Letterman.

As a very special guest for this event, we have Belgian star Richard Ruben. Richard is the number 1 Belgian showman, and over the last two decades he’s been performing in every major venue in Belgium and France.  Last year he jumped without a parachute into Stand-up comedy in English. He’s refreshing, clever and very funny! For you, expats who are living in Brussels, Richard Ruben is the perfect act to make fun of his hometown: Brussels.

Make sure you get your tickets in advance !
Doors open at 6:30 pm, come early and enjoy some great food and spectacular Gin & Tonics!
Online tickets : 17€On the door : 20€