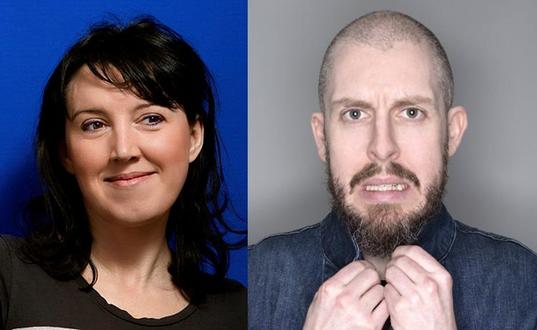 Join us for another spectacular Comedy Night with Eleanor Tiernan’s long awaited return to Brussels.  Together with her, and for the first time in our city, award winning comedian Carl Donnelly.

##Eleanor Tiernan Eleanor Tiernan is an Irish comedian well-known among Irish audiences for her live stand up performances and her work in TV, theatre and on radio. She was featured on Stewart Lee’s Alternative Comedy Experience on Comedy Central and has played Latitude, Glastonbury, Montreal Just For Laughs and all of the top Irish comedy festivals.

“Tiernan boasts a magnificent curl in her lip and snarl in her voice.” SUNDAY TIMES

“Tiernan has a uniquely oblique angle on the word, and her routines have a touch of whimsy while grounded in astute observation. It means her set sounds fresh and original, without being so wilfully strange it will alienate all but the most dedicated followers.” CHORTLE

He appeared on a selection of TV shows (Mock The Week, Russell Howard’s Good News etc) and travelled the world having performed at the Just For Laughs Festival in Montreal, The Melbourne International Comedy Festival, The New Zealand Comedy Festival and pretty much every other comedy festival there is.