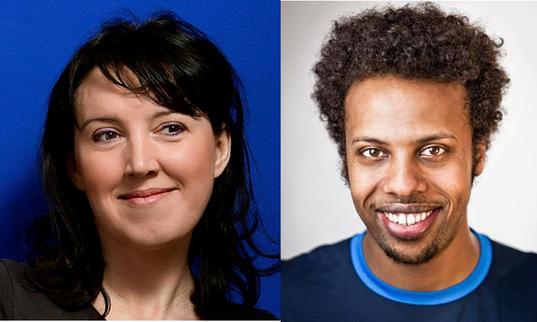 Another outstanding line up for this show with:

Eleanor Tiernan is an Irish comedian well-known among Irish audiences for her live stand up performances and her work in TV, theatre and on radio. She was featured on Stewart Lee’s Alternative Comedy Experience on Comedy Central and has played Latitude, Glastonbury, Montreal Just For Laughs and all of the top Irish comedy festivals.

“Tiernan boasts a magnificent curl in her lip and snarl in her voice.” SUNDAY TIMES

“Tiernan has a uniquely oblique angle on the word, and her routines have a touch of whimsy while grounded in astute observation. It means her set sounds fresh and original, without being so wilfully strange it will alienate all but the most dedicated followers.” CHORTLE

“Eleanor Tiernan is far and away the best comic actress I have seen on stage.” HOT PRESS IRELAND

“The fastest-rising comedy talent in the country” IRISH TIMES

Prince Abdi is a British stand up comedian/Actor/Writer.

His versatile and unique story telling makes him a feel good comedian and one to watch.

Prince has written and starred in his own TV sketch for the BBC, Comedy Central and ITV as well as comedy and drama features.

Other TV credits include:-

Comedy Central (The World Stands Up).

Show me the funny (ITV1)